In 2016 he took part in the ‘Rogue Film School’ run by Werner Herzog.

In 2020, he is going to finish an another master’s degree (Master of Arts, M.A.) in media education and communications sciences at Passau University.

At the age of 12, Kai began experimenting with his camcorder, the video-recorder being his first editing working-place. Over the years Kai did work experience at TV, theatre and film productions and in an art gallery.
For half a year he ran an improvisation workshop and started a small marketing firm with 'FILMwork-STUDIO' for image-films, commercials and event clips.
In 2012 he was awarded the Bavarian Youth Video Award for Best Script for his short film „clash“, a film that plays with the clichés of a multicultural society in a sensitive way.
Two further short films ("Üç" and "In the Gallery") deal with the same subject of being a stranger, of feeling different. Both were presented at the Cannes Filmfestival Short Film Corner.
Kai’s documentary on young Israeli-Arabs in Israel, “Marhaba, Shalom“ and on youth culture in Turkey, “Her sey acik – Everything is open“, realized together with film-maker Michael Hehl, were shown in cinemas – as were some others of his short films.

2015 his short film “Still Life” was awarded the “REMI Award” in gold at the “48th Worldfest Houston” and nominated i.a. at the “17 th Maryland Film Festival”.

2017 his 30-minutes feature film „stranded” brings into focus the current debate on migration in Germany – how refugees have to redefine their existence and adapt to continuously changing living conditions once in exile.

Now Kai Sitter has finished his latest medium-length film „CAUGHT“, where a young student feels lonely - in Passau, Lower Bavaria: the Wild West of Bavaria. The young man wants to get accepted by his environment but at the end he is still a stranger, still feeling different. 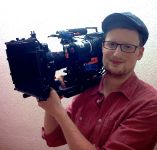